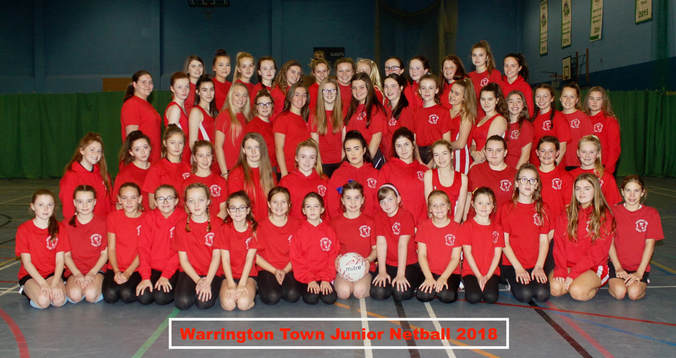 Warrington Town Junior Netball Club was launched in July 2007 and has continued to grow at a pace. We now have over 100 children attending training on Tuesday evenings from 5-7.30pm at Birchwood Leisure Centre in Warrington

The junior’s participate in the Regional, Cheshire Junior League and have matches once a month from September to April. We will have an U10 and U11 High 5 team, plus 7-a-side U12, U14, U15 and U16 teams competing at local, county and regional netball leagues.

2009/10 was a very good year, with the U14’s finishing runners-up and the U16’s winning their respective sections. We also had 5 players selected for Cheshire County.

20012/13 we have 5 players who have qualified for final trials for Cheshire – so good luck to them in September!

Warrington Juniors attained our Bronze CAPS, (Clubs Action Plan) which is awarded by England Netball. This shows that we have the correct procedures and structures in place, our CRB checks have been done, Child Welfare, session plans etc. This was a thankless task which took a lot of time to put together, and I would like to give a huge thank you to Jackie Dearden who took on this project and tirelessly gathered all the information and presented it for approval

Warrington Juniors will be applying for the Silver CAPS by the end of 2013.

Warrington Netball Club provides a fantastic senior netball club pathway for all our junior netball players who can progress into the senior squad. To date we have a number of players who have ‘come through the ranks’ and are now valuable members of our senior club. Of course we are resigned to the fact that we will lose players who may not want to commit to a more ‘serious’ environment’, but it is important that the structure is in place should they wish to continue playing, and receive a higher level of training and game play

As with the senior’s, the junior club continues to grow, and again it is due to the coaches giving up their time to plan and run the training sessions. They are extremely dedicated and committed, and all our lead coaches are UKCC level 2 qualified netball coaches or working towards securing the qualification.